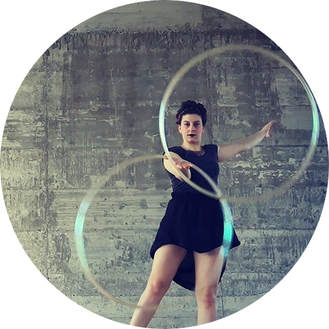 Federica Pennetta is an Italian hula hoop and aerial hoop performer. She has curly hair and, as they say in Italy: "every hedgehog is a whim". So getting out of common patterns it has always been a temptation! If her creativity needs to explode, it must necessarily come out in the form of a circle! But why do we have to be happy only with one? Since 2010, she studied hula hoop in several intensive workshops with some of the best international teachers. She also attended a variety of professional classes such as: dance, juggling, aerial ring, flexibility, acrobatic and clown with highly skilled teachers in order to expand her knowledge and to become a 360 degrees circus performer. In 2013, together with her partner in life Massimo Minervini and friend Cristiana Soldaini, they founded "The Circus Gang", a jugglers group whose training and creation activities are based in Pisa, Italy. With the group Federica regularly performs on stages and street shows and also actively teaches workshops for children and adults throughout Italy and Europe. 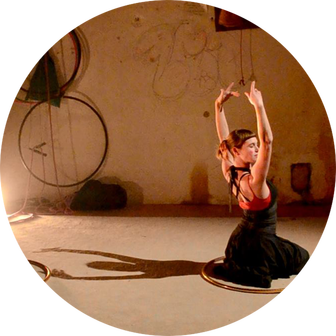 Tatjana started hooping in 2009., after many years of being obssesed over circles in painting. First few years she learned from availiable hoop videos online, and in 2011. she connects with circus group Cirkultura. From then she has attended many hoop workshops, object manipulation, clown, dance and juggling workshops. She went trough continious course of circus pedagogy trough educative program of Cirkorama, and is the leader of the educative circus arts program "Cirkuliranje" (Cirkultura). She has made various acts on many different festivals in Croatia and abroad - solo acts, in Cabarets, street shows, performances...
She is the initiator and part of organisation team of CHC and THE Festival; and a part of organisation team of Cu'fus festival. 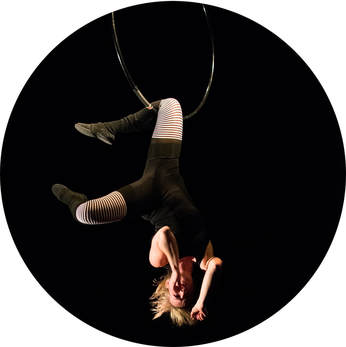 She was encased in the world of circus by the street and fire juggling many years ago.
2002. she tried out acrobalance, acrobatic silk and static trapeze, and 4 years after aerial ring. All of this "playing in the air" takes control over her life, and she directs her energy in to aerial performances and teaching aerial acrobatics. In 2008. she (and a few friends) establishes NGO Cirkorama.
By now she's been in numerous acrobatic, juggling and clown workshops, performed on various street festivals, colaborated with foreign and domestic circus atrists on circus projects, cabarets and shows. 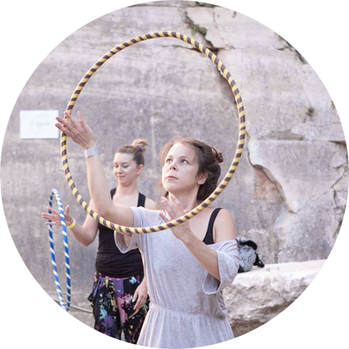 Few years ago, Sanja got stuck in a circle.. As a member of juggling group Red Rays she led various workshops for all generations (poi, hoop, slackline), and got experience in street performances with fire and shows for children. She attends numerous workshops of contemporary dance, hoop and flow, and combines learned skills with her hooping 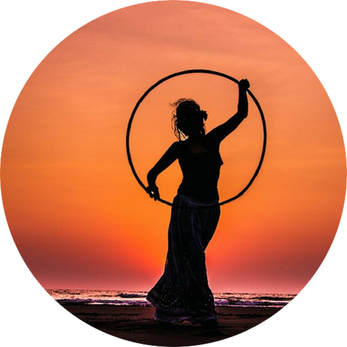 Eva is hooping since 2006/07, and leading her Happy hoop- hoopdance school. She prefers hoop dance, and is interested in integrating dance moves in hoop moves. She creates her own hoop meditations, creative visualisations and othe actions that are calming the body and mind and helping people to be happier. She loves forests (and hooping in them), animals and every form of creative expression. She loves her job, life, Earth, universe, galaxy - even the next one, and the next one and ito the infinity.. 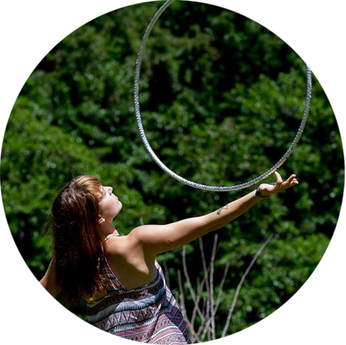 Diana is a modern circus enthusiast that's in love with expressing through the movement and with the smile of the audience. She started hula hoop dancing in 2012 and since then has been upgrading her skills at numerous workshops, courses and hula hoop conventions that directed her toward performing arts. By training hula hoop and acrobatics in the performing hall of DZIU Medika, she discovered a link between various contemporary circus skills, body movement and manipulation of objects. She collaborates with other artists in the production and performance of various performances. 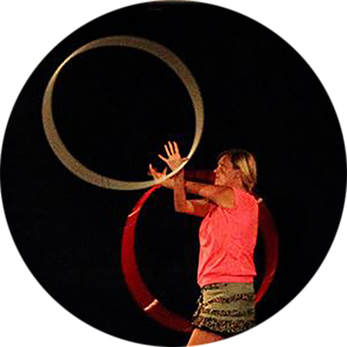 In 2014 Ivana became the first certified Hoop Love Coach in Croatia.
She is an active hooper for 3 years now. In those years she has taught many hoop dance and hoop workout workshops for kids and adults all along Croatia.
She is also a hoop dance performer and she would like to point out the performances at the Chikaz Fit Fest at the Student days in Rijeka and the one at the 2. Croatia and Hula Hoop convention in Samobor .
Ivana and her husband also make hoops - those regular ones for beginner, advanced and professional hoopers, but the really BIG thing is that they made the 1st LED hoop in Croatia!
She is not just a hoop babe! She is also a mother and children's entertainer AND she started to juggle (she mastered the initial level) and is interested in Poi, all thanks to hooping and multi hooping technique! 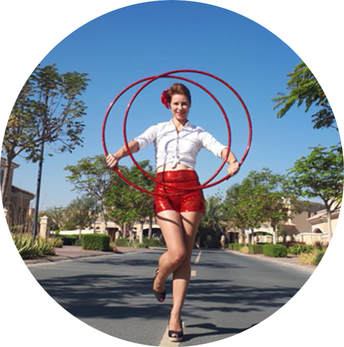 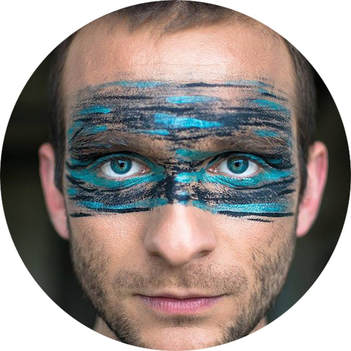 ​His first encounter with circus skills was in 2009 and after that, he rarely lets go his props out of hand . His education begins with the classic juggling with balls and clubs as well as the basics of partner acrobatics - acrobalance .
Later, he involves crystal ball manipulation -  contact juggling - in his expression, and fire juggling.
Aleks expands his skills in partner acrobatics with AcroYoga .
Since the beginning of 2015 he started to take contemporary dance classes at the Zagreb Dance Centre .
He has attended numerous Croatian and international workshops and juggling and acrobatic conventions.
Aleks also regularly teaches juggling workshops in Zagreb .
From 2010 to the present he performed at the numerous street, music and medieval festivals . 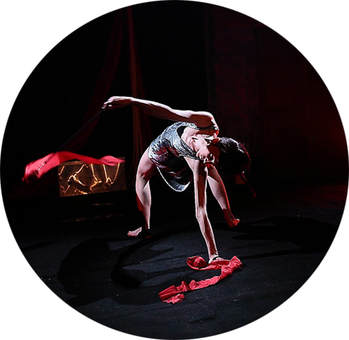 While finishing University (graduated at University of Zagreb Faculty of Science Department of Mathematics in 2012.) Tanja Puklek started her engagement in contemporary dance, poi and similar object manipulation, sewing, partner acrobatics and yoga.

As author, co-author, performer and costume designer she worked on several contemporary circus and dance performances  performed at various festivals and events arround Croatia. She performed Fire Shows at street art festivals and medieval festivals. Also, she has been a part of colaboration that presented Croatia at Calabar Carnival in Nigeria, African biggest carnival. 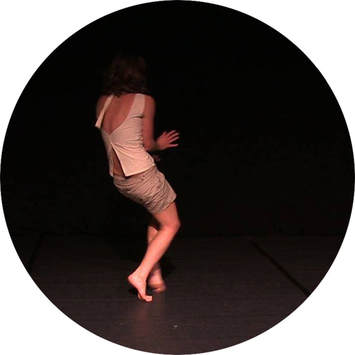 Although employed in classical 8 hours, 5 days a week working system, her interest in movement and dance is her primary concern. She is actively dancing and making a big interest in further education in
the area of Contact Improvisation and Contemporary Dance. She likes to work as a performer because of the focus and severity of approaching work. She is most interested in researching the movement through dance improvisation, with the awareness of the physical and energetic body and breath. Search for a movement not initiated from &quot;the head&quot;, but a movement that creates motion in its independence. In addition to this kind of movement, he is interested in studying and deepening focus and presence on the scene.
She is an active member of the dance troupe TO, Circus association Cirkultura, and the Contact Improvisation Group that functions as a lab. She is educated in the field of contemporary dance and Contact Improvisation with various domestic and foreign pedagogues. She participates in various performance, video, site-specific, impro projects. 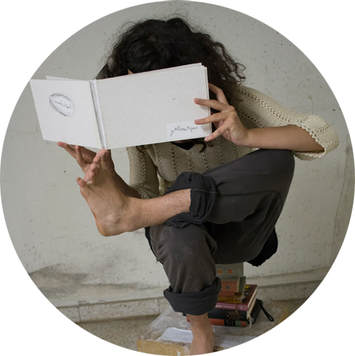 She finished some art schools and gained some papers for it.
In the meanwhile, she juggled, did ceramics, painted, immersed herself in various theatre
and clown techniques, and did creative workshops for children and adults. 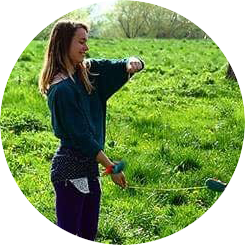 Natalija was born in Zagreb in 1988. Since early childhood, she has shown inerest in performing arts and expression trough movement and acting. She has been attending the Zagreb Youth Theater for eight years, after which she decided to explore the world of graphic design and became graphic tehnician. In 2013 she joined the circus association Cirkorama where she gained aerial acrobatic skills and became circus pedagogue trough continuous practice and education. In 2015 she started to learn Tai chi with Jasmin Miklec and went trough seminars related to human anatomy and good posture for 3 years. Besides giving circus and Tai chi lessons she also organizes movement workshops with a holistic approach.